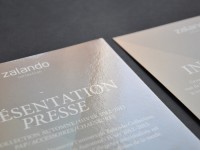 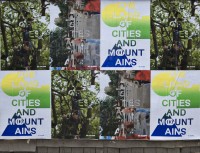 Sebastian Haslauer is a longterm friend of THE BAKERY and a collaborator for just over a year. While he may be best known for his illustrations, his creativity blooms via multiple mediums. He is a passionate painter and sculptor, although he confesses that painting, in particular, is the medium through which he feels most free to express himself.

For Berlin Artweek 2019, Sebastian displayed a selection of his works at an exhibition titled ‘Deutschland, die Ausstellung’. Three months in the making, the show brings together pieces that, despite the title, are only loosely political. We caught up with Sebastian about the exhibition headed down to the show to catch up with him and find out more about his works.

TB: Tells us about the title of the exhibition.

SH: When I got offered the exhibition, I went through my paintings and there were a couple that really worked together. I wondered what the connection between them was. There is something a little bit, loosely, political about them. One is a German flag upside down underneath all-black paint and another uses the German flag’s colours. One shows something burning, a ‘special offer price’ is painted on one of the works, and one painting basically consists of a collection of browns. So I just called it Deutschland die Ausstellung.

TB: It is quite a brave title…

SH: I don’t want to be polemic and that’s why I could take that title because I knew it would be really broad and open in meaning. I had anxiety when I saw the AFD getting 23,5% in Brandenburg and thought, ‘oh God I’m having this exhibition called ‘Deutschland’’. But the situation is how it is. I’m dealing with it, the paintings deal with it and everybody’s dealing with it, but nobody’s really touching it artistically because it’s very hard to do it as a German. Especially in an ambiguous way as the exhibited works. But I don’t really see the paintings as being that political. They’re not more political than I am, they’re paintings. Although the point of view is definitely german. So yes, it’s a weird title. Next time I will choose something really abstract, I think.

TB: Did you create any paintings especially for the exhibition?

SH: I made some paintings for the exhibition because they built a good bridge thematically. But it’s really hard to paint towards a title because a painting goes towards something itself. You can’t just push it in a certain direction. I generally don’t paint with a theme in my head, I just paint. Paintings are paintings. They mean nothing and everything.

TB: You’re known more for your illustration work. Is it hard to assert yourself as a painter?

SH: Everybody knows me from my illustrations, so I had to force people to see my paintings. Because that’s what I do if I’m not illustrating. Before my daughter came, there were about four years when I only did art. I had some residencies where I was free to just paint. That’s what I would like to do forever.

TB: What was it about painting that drew you to it?

SH: I started painting because I was somehow missing what I really wanted to do. I really enjoy illustrating and providing a service, and if the clients are happy I’m really happy. But, sometimes I really want to think about stuff I personally care about. I’m not a gifted talker, so I really want to communicate visually with pictures and colours.

TB: Do you feel like you can say more through your paintings?

TB: Tell me about your process.

SH: I’m on the floor a lot. I always have a canvas on the floor and I paint on the wall and stuff drips down on it, I walk on it and loosely paint something here and there, at some point, if it comes together, I just put it on the frame and clean it. Because it’s all wrinkly, I wet and warm it again and then I stretch it over the canvas, then take it off and put it on again. It feels like calving leather.

TB: Your works are quite abstract, and yet in certain pieces, you include extremely realistic details such as the cigarette butt and the Mon Cheri chocolate. Why did you decide to include these elements?

SH: Sometimes people say that some works are cryptic and that they don’t understand them, although they are obviously dealing with something thematically. But it has to be cryptic so that people ask themselves their own questions. I’m not a preacher. It’s just a painting, it’s the stuff I think about. For some people, it would be just too abstract and loose for them to really adapt to it, so I sometimes include details that are also windows in the paintings and bridges to the viewer. That way they can connect it together themselves. I think the gestural and then the decorative are a really good contrast. Otherwise, it would be too vague for me too. The naturalistic parts are an accumulation of power and that way I charge the painting with energy.

TB: Can you tell me about the Lidl painting?

SH: Yeah, that’s kind of an embarrassing story really. I got the canvas for free. It is the most expensive tissue and had the most amazing blue already on it. Blue is the most expensive colour, in this painting, I think there are around 800 euros just of blue. So I got it. And then I took it to the studio, you have this big blue thing on the wall and it’s really intimidating. It was quite overwhelming to paint on it, much more so than on a blank canvas. I painted a few elements and then it was finished, but not really good. It reminded me somehow of Miró. It’s a little bit like a bad Miró, you know. So, I fought with it for two years and then I just gave up and just put this Lidl sign there. I was like, it’s just like a cheap, discount Miró. Funny, that, considering that with the materials used, it’s probably the most expensive painting I ever produced.

TB: Do you have a favourite painting from the exhibition?

SH: I think my favourite is this one [points to the painting with the smoke] because the process was easiest but it has all the suspense I strive for.  I also like the duality of it being a bit dirty but also decorative. You know, the smoke makes you wonder, where does it come from? Perhaps it’s an oil field, perhaps a car. You don’t really know what burns there, it feels kinda ominous. And then there’s this really cute rose shape. They don’t fit together. I painted this in six weeks and had a residency so I painted this smoke every day for 11 hours. It’s really rewarding because I feel like I suffered for it, though it was so easy. Perhaps that’s because my father is a Catholic. I have to suffer for every painting so when it’s finished you’re like ‘phew!’ [laughs]

TB: What are you going to do next then? What’s your next project?

SH: Well, I’ll be drawing guinea pigs for a project with The Bakery, and then I have another exhibition of sculptures later this year called Dingbats and Buildings. 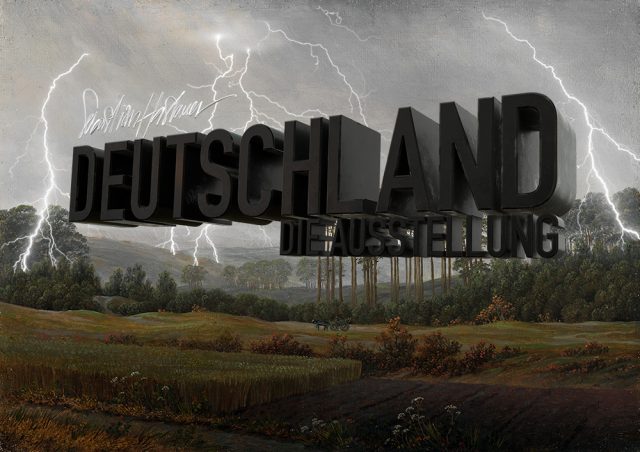 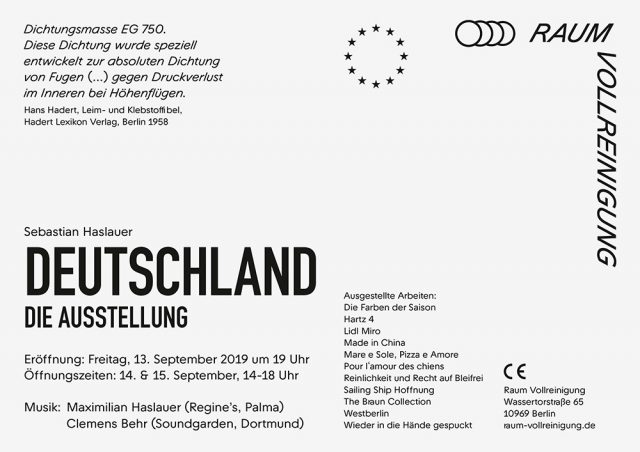 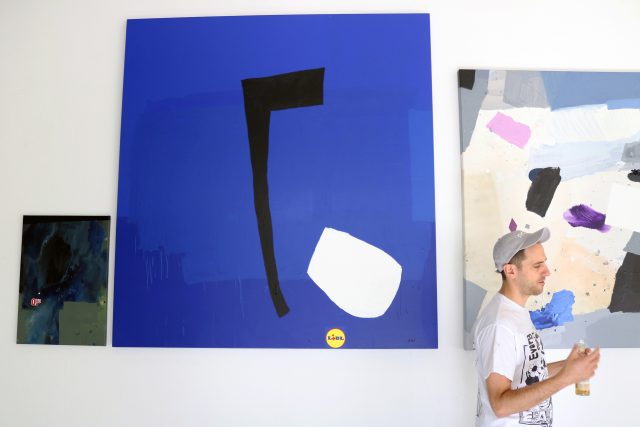 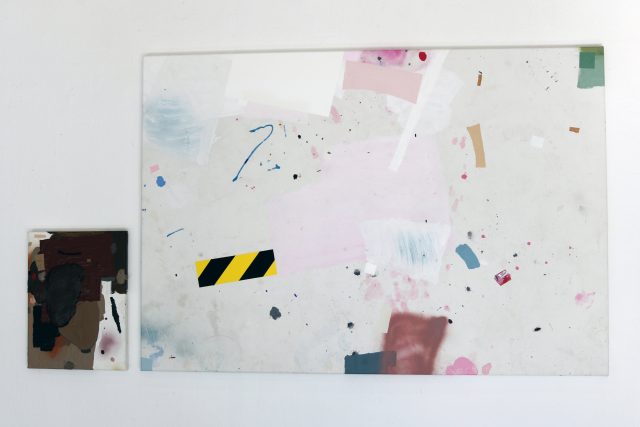 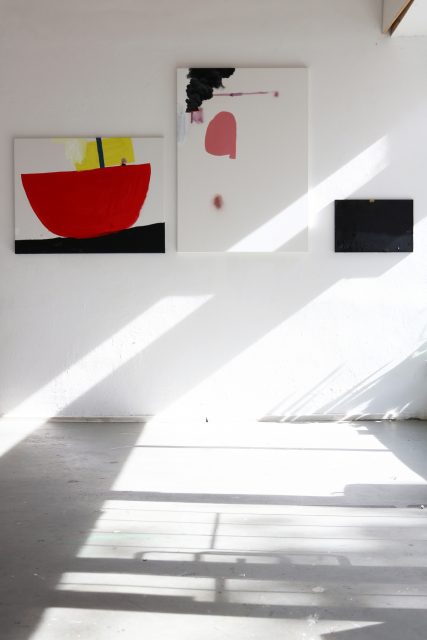 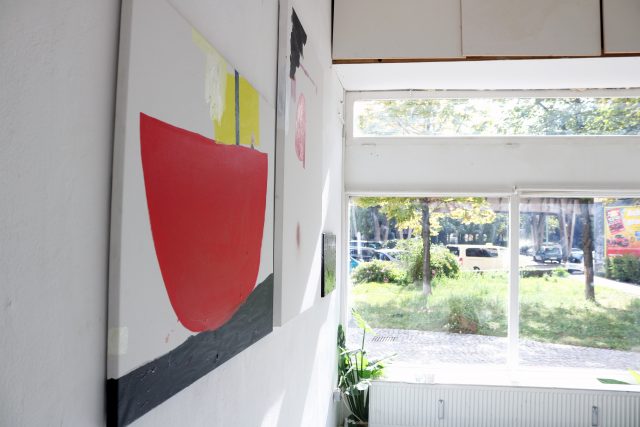 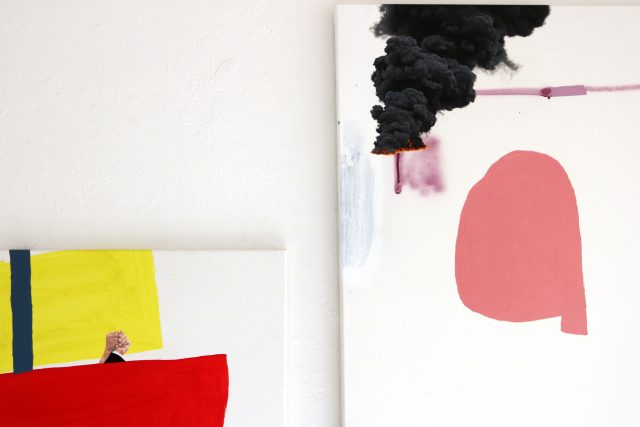 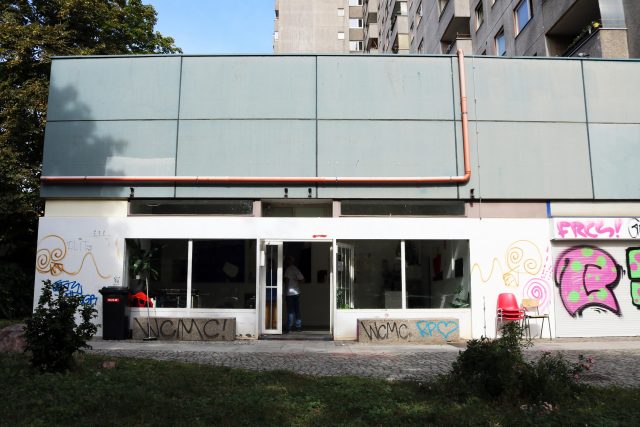 
Warning: Invalid argument supplied for foreach() in /homepages/27/d220215754/htdocs/wp/wp-content/themes/thebakery/functions.php on line 173